At 17, Venetia’s ambition to become a jeweller was fortified by attending a handful of short-courses in jewellery manufacture. At around the same time, she commenced a position in a large jewellery store as a Sales Consultant, learning a great deal over the 2 years she spent there. Then in 2003, Venetia completed a work experience placement with Vangeli Manufacturing Jewellers and in 2004 she began her 4 year apprenticeship in the field of jewellery manufacture at Diamond Ring Designs in Canberra. The year 2006 saw the completion of her Cert. III in Jewellery – Trade with Distinction from Enmore Design Centre, Sydney. Venetia was a Finalist for ‘Apprentice of the Year’ in the 2008 A.C.T. Training Excellence Awards and later that year she completed her apprenticeship and became a fully qualified jeweller. Venetia spent the next 4 years working for various Canberra jewellery companies and completing a Diploma in Gemmology with the Gemmological Association of Australia to become a qualified gemmologist. In 2012, Venetia took a leap of faith and committed to Venetia Major - Bespoke Jewellery full time and has never looked back. To mark International Women’s Day for 2013, the ACCC invited Venetia to be a part of a panel discussing work/life balance with her focus being the challenges and advantages of running a small business from home. Venetia was also nominated for the 2013 Telstra Australian Business Woman of the Year award. In 2014 Venetia took 14 months off to care for her first child and renovate the studio. In 2017 Venetia launched her silversmithing courses to great success and one of her early students was Kelsey. The business was growing rapidly and Kelsey went on to become Venetia's first apprentice. Bespoke Jewellery was recognised as a top three Finalist for ‘ACT Small Employer of the Year’ in the 2018 ACT Training Awards for the work done in creating a safe and positive work environment. In March 2019, Venetia and family welcomed their second son. Venetia says that running her own business from home is a great lifestyle choice. “Bespoke Jewellery has been my passion for over ten years and I am proud to serve the people of Canberra and beyond.” — Venetia Major Every day Venetia works to build the profile and reputation of her jewellery design studio by exceeding the expectations of her clients and designing and making beautiful jewellery. Her passion lies in creating wonderful jewellery pieces which excite their owners by being a physical representation of the intense love they have for one another. Using elements like colour, birth stones, shape, history, children, stories and heirlooms to create a piece that tells their unique story. Whilst Venetia has a high level of skill in traditional jewellery manufacture, she is constantly seeking out and experimenting with new and exciting techniques and enjoys being challenged by her clients ideas. Venetia welcomes her customers to her rambling garden with a productive veggie patch and many fruit trees. Visiting children enjoy feeding the chickens and when her bounty of home grown produce exceeds needs she is pleased to offer it to her customers. In her spare time she will be pottering in the garden, teaching her children to plant seeds, harvest veggies and collect eggs from the hen house. The challenge is getting them back to the house safely. 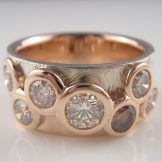 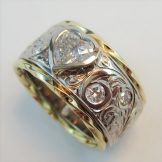